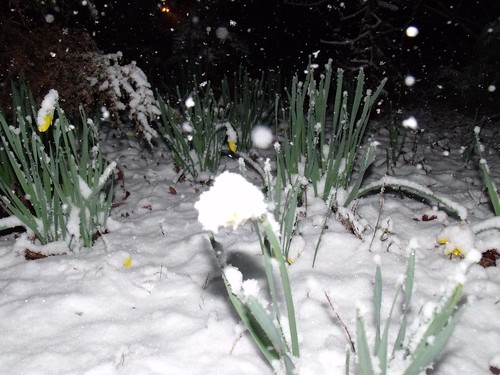 Richmond, Virginia metro area. Teckelcar tells us about this snowy image: “The picture was taken Feb. 19th 2012 during the snow storm that swept through the Mid-Atlantic. I love pictures of flowers in the snow and I almost didn’t get any this year, this was our first snow of the season and most likely last.” 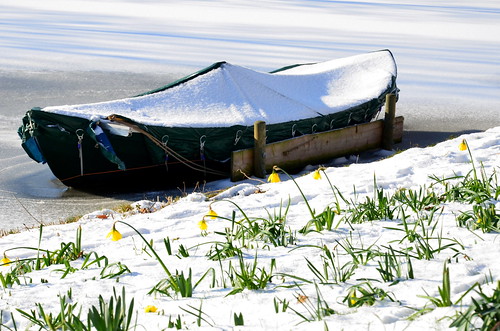 Daffodils in the snow, originally uploaded by boukje2006.

Leiden, The Netherlands on February 4, 2012. Photo by: Boukje Verheij

With some daffodils starting to come out months ahead of schedule, many of us are wondering if there is a need to protect our daffodils from the winter if and when it arrives. We contacted Scott Aker, head of horticulture at The United States National Arboretum and asked him about daffodils and cold weather. Thanks for this very interesting and useful information, Scott.

Question: If the daffodils have started to come out, should we cover them?

Answer: It’s not a bad idea to cover flower beds where bulbs are planted with a loose mulch during the winter AFTER the soil has frozen or at least has gotten as cold as it is going to. Loose mulch materials like straw, dry leaves, or boughs of Christmas trees are often used for this purpose. The objective is to insulate the soil from wild fluctuations in temperature. Snow is an even better insulator, but since that is lacking in much of the country, mulch will help to prevent rapid temperature fluctuations that might be harmful. At this point, it would apply to the sprouting foliage mostly, since flower scapes don’t emerge until soil temperatures are much warmer.

In looking at your Facebook page, those who already have blooms seem to be from rather mild regions (Cornwall, Southwest US, and Southeast US), so I don’t think they have to worry about the kind of intense cold that would harm the blossoms. Keep in mind that they only last for a week or two, so they will begin to deteriorate, particularly if the weather is hot or if there is a lot of wind and rain that may damage the blossoms or speed their senescence. A loose mulch may help gardeners in more northerly climates to prolong the life of daffodils that are already in bloom, but there’s not much that can be done if temperatures go below 22-25° — some injury to the blossoms is unavoidable.

Not yet! Not yet!, originally uploaded by Art Drauglis

Question: If it’s foliage that is showing during these early weeks, will the daffodils probably be OK (sometimes a little frost damage but the flowers will be fine)?

Question: Will the foliage bloom only when the temperature reaches a certain level?

Answer: The blooming time is a complex thing that is controlled primarily by temperature—both hours of chilling, and the soil temperature after the bulbs have received sufficient chilling. In the autumn, bulbs grow roots into the soil and then the bulbs must be chilled before they will bloom. Chilling is generally at soil temperatures below 40°F, and bulbs will not bloom at all if they do not receive enough hours of chilling, which is different for each cultivar. On average, fifteen weeks is sufficient. Many bulbs, including most Narcissus, naturally begin to grow leaves before the chilling requirement is met. Generally, the leaves only grow to one or two inches above the soil and remain at this level throughout the rest of the chilling period. The more time in chilling conditions, the faster the development of the flower scapes when soil temperatures do increase in the spring.

Question: If the daffodils have bloomed, are they at risk of damage if the temperature gets down to 25-26 degrees?

Answer: Yes, this is the case if the flowers are fully open.  Some cultivars can go to even colder temperatures if they are not fully opened.

Is Spring Really Around the Corner?, originally uploaded by Sienna62 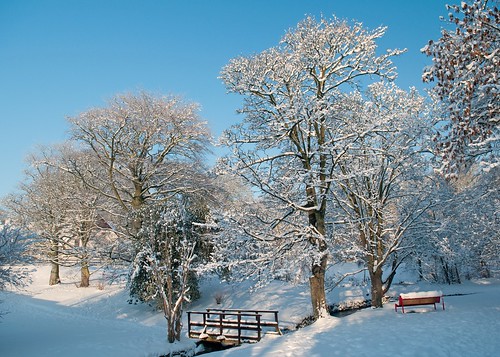 Welcome to the first photo of the First Daffodils 2011 season. This stunning photo is perfect for our beginning the new First Daffodils season and as we start our travels through the winter months.

Photographer Deirdre Gregg tells us about this December 20, 2010 photo taken at the Ulster University Coleraine Daffodil Gardens in Northern Ireland: The gardens have been stunning looking with the snow over the last week – hope to see the first signs of the daffodils soon!

Daffodil shoots in the snow, originally uploaded by philmciver.

Photographer philmciver tells us about this snowy February 21, 2010 image: It was taken in my garden in Loughborough, which is in the county of Leicestershire, after an overnight snow fall of about three inches. The image was taken using a 100mm macro lens. 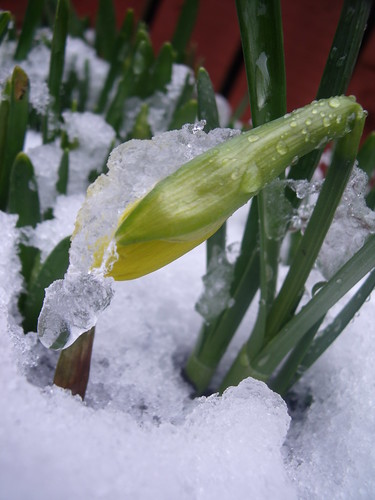 Photographer pinkjay tells us about this February 21, 2010 image: It is a shot of a tub of dwarf daffodils in my back garden after more snow during the night. You can see the snow melting on the end of the bud that is opening up. We have experienced more snow than normal over the past few months.

It was taken in Newtownabbey, (near Belfast), Northern Ireland, UK. 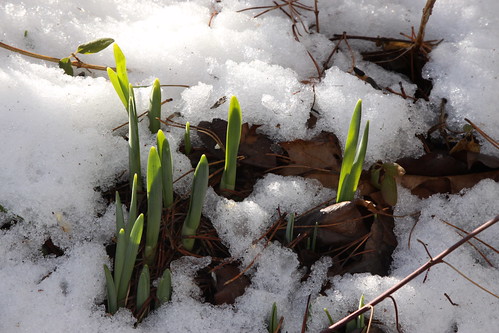 Photographer iofdi tells us about this February 19, 2010 image: This photo was taken in Milan, Ohio. These are the first of my Narcissus daffodils to bloom. They are totally bright yellow. There is a photo here farm4.static.flickr.com/3560/3367223882_28f674494f_b.jpg of them in bloom. They were in full bloom March 18 last year.

Here is a link to the image larger on white, courtesy of iofdi. Impressive. 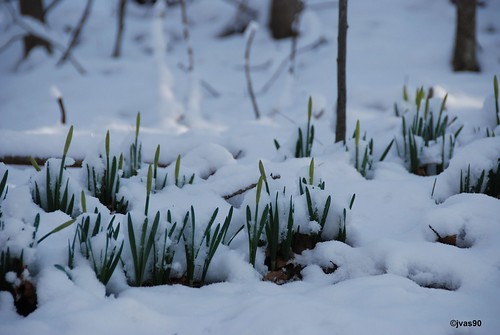 Photographer jvas90 tells us about this image: It was taken last Saturday Feb. 13, 2010 on the Berry College campus in Rome, GA. We usually see the daffodils bloom here in Georgia around the first couple of weeks in February.. sometimes as early as the last week in January. This winter however has been colder than normal for us.. I am hoping to go for a walk today and see if any of them have bloomed.

Is Spring Really Around the Corner?, originally uploaded by Sienna62.

Photographer Sienna62 tells us about this wintry image taken on February 11, 2010: This was taken in Keller, Texas in my front yard after a historic snow fall. We don’t usually get much snow around here, and when we do it is usually an inch or less. We got over a foot of snow during this storm. I went outside to take pictures of snow and was shocked to find these daffodils blooming in the snow! 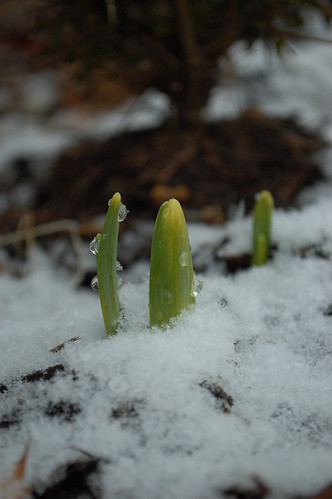 Not yet! Not yet!, originally uploaded by Art Drauglis

Photographer and furniture designer Art Drauglis tells us about this snowy February 5, 2010 photo: It was taken in my garden in northeast Washington DC last week. I redug and replanted that section of the yard and garden this past fall for the first time in 8 years. I noticed them poking up just as a blizzard was about to hit, hence the title “not yet! Not yet!”

They are some Division 1,2,or 3 daffodil, that is about as specific as I can get.