Photographer roseannadana tells us about this January 22, 2011 image: This image was shot in Skagit County near Mt. Vernon and is one of the many fields that hold promise of beautiful yellow Daffodils to come. Though it was a cloudy and hazy day the fields looked beautiful!

Photographer Dean Forbes tells us about this artistic March 20, 2010 image: I was shooting around a daffodil field when I saw the painter on the side of the road set up in a ditch between the road and a fence. I asked him whether I could photograph him working and he consented. I took several images using a wide-angle lens.

Photographer Dean Forbes tells us about this mellow yellow image: The image was taken in the Skagit Valley of Washington state on March 20. I don’t know the name of the variety. I used a 80-200mm telephoto zoom lens set at 80mm and cropped the image to eliminate an obvious horizon to help give the “endless” effect.

The area farms grow daffodils and tulips for the cut flower industry and are a major tourist draw. The valley is about an hour north of Seattle. 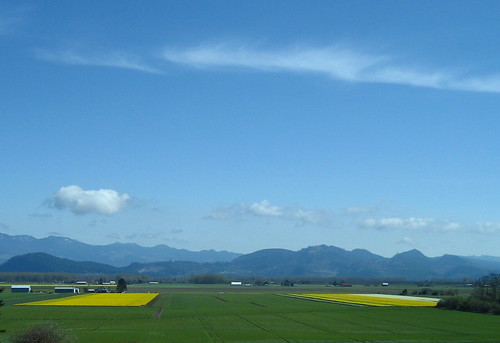 Overview of some Daffodil fields, originally uploaded by Ursula Haigh.

Photographer Ursula Haigh tells us about this March 18, 2010 image, which is geotagged on the flickr page: It’s hard to tell the type, since this photo was taken from Best Road on our way to La Conner, WA, but the unmistakable colour is proof that these are the beginning of many more daffodils & narcissus that will fill the Skagit Valley bulb fields prior to the arrival of the tulips later this month!

According to the Skagit Valley Bulb Festival hotline, the Daffodils are about a month ahead of schedule due to the unseasonably warm weather. They said the tulips are up and should be in colour at the end of March. If you plan to attend ~ don’t delay the beauty in these lovely fields is fleeting!

Here’s a photo set posted by Ursula Haigh titled “Road Trip to Skagit Valley”, if you would like to see more photos of the daffodil fields and the La Conner area. 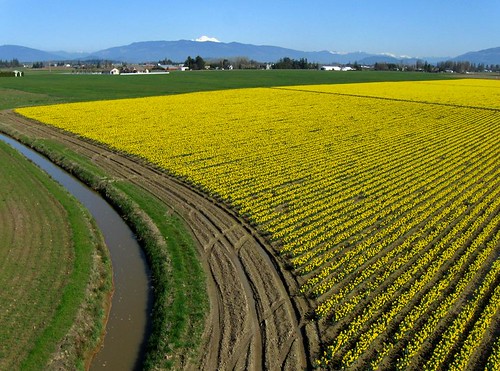 Photographer cookinghamus tells us about this March 6, 2010 image and his technique using a kite and camera: This photo was taken via camera lofted by a kite, this technique is called Kite Aerial Photography, or KAP. The technique is this: You launch a kite (some kites are much better for this than others). When the kite reaches a stable height, you attach a camera to the kite string by means of a device called a picavet cross. The camera attaches to a harness located beneath the picavet cross, and stays relatively stable, and pointed in the same direction. Then you simply let out more string, and the camera gains altitude. I have modified the camera I shoot with, I’ve caused it to take photos at 5 second intervals. The day I shot that, I had the camera in the air for approximately an hour and a half, with a total of about 590 images. The technical details on the kite and camera are listed in the description of the image. (“Rok” is short for Rokkaku, a kind of Japanese fighting kite: en.wikipedia.org/wiki/Rokkaku_dako )

The field also appears on this map: www.tulips.com/bloommap.cfm It was field #11. I know relatively little about daffodil varieties, according to that website, the daffodils planted are Dutch Master and Flower Carpet. I have no idea which of those I photographed.

I have been doing Kite Aerial Photography for about a year, the skagit valley daffodils and tulips were the reason I first decided to attempt KAP. You may be interested in the other photos I took that day, which can be found here:

If you’re curious about KAP, my other KAP work can be found here: www.flickr.com/photos/cookinghamus/sets/72157622373376607/ (including shots of the same general area from last year, which included daffodils and, in a separate shot, tulips). 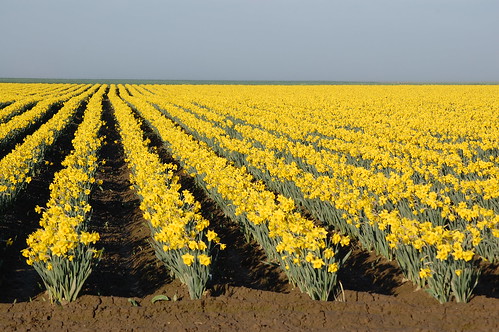 Photographer mizjane225 tells us about this March 8, 2010 image: The photo was taken in the Skagit Valley just west of Mt. Vernon, Washington one morning last week. The valley is famous for huge fields of bulbs both daffodils and tulips. The flowers are grown by commercial bulb farmers. These photos on my stream were taken in the early morning when ground fog was still present. In this photo the ground fog blocked out any detail in the background therefore allowing for a very simple picture of just daffodils. 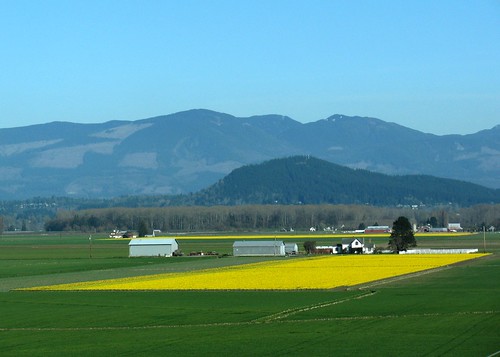 Here is a lovely image by photographer roswellsgirl, taken of the Skagit Valley daffodils in bloom on March 6, 2010.

See “First Daffodils” in Skagit Valley in this photo by roswellsgirl posted in January .

In our second of the two-part series, we post this February 27, 2010 image. Photographer roseannadana tells us: The area the fields were taken in has a zip code of 98273 for Mount Vernon, Washington. The fields are located on Best Road near Christianson’s Nursery. I was attending a workshop at LaConner Flats and left early so I could take pictures of the fields.

The surrounding area is a hub for tourists and the Tulip Festival follows here in a little over 2 weeks. Tourists come from all over the world to the area of La Conner, Anacortes and Mt. Vernon to see the Daffodils and primarily the Tulips of Skagit County, WA.

“Everything” here bloomed early – Spring came very early. We could still get a freeze here in March.

We love this photo. It makes a great first of two series with our next post by the same photographer, roseannadana. This image was taken on Februrary 14, 2010, and roseannadana tells us: This lone daffodil I captured in Mount Vernon, Skagit County, Washington. The harvesters had arrived to top the daffodils, I expect to use as cut flowers. It was the first daffodil I saw in bloom in the fields in our area. 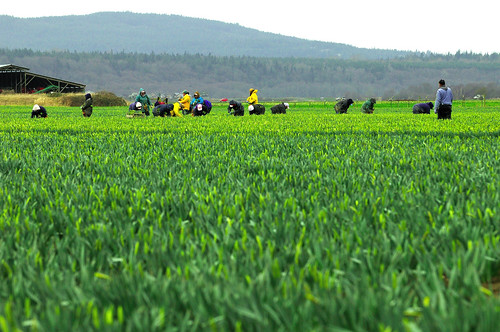 Photographer hawgwildterry tells us about this February 16, 2010 image: The photo was taken in what is known as the Skagit Valley which is located in Skagit County, Washington. The location of the valley is west of the town of Mt. Vernon.

This area is a large daffodil and tulip growing area and features a yearly Tulip Festival which I will provide a link to for this year.

The location of this shot was 17949 Beaver Marsh Road, Mt. Vernon WA 98273. If you have Microsoft Streets and Trips or any other mapping program you see the location. Better yet, if you have Google Earth you can see the satellite photo of the area and see the valley and all the farms.

For more information on the photo you can click on the link located on the right side of the photo page ‘Additional Information’ and then the ‘More Properties’ link.

Addendum on February 22, 2010: Wife and I went up again yesterday and the daffodils are really starting to show their color. Irises are getting close and the tulips are about 6″ out of the ground. We still have a chance of a March cold snap and snow. Could get interesting around the valley if that happens.

You can see our Skagit Valley listing on daffodilfestivals.com here.